This work is licensed under a Creative Commons Attribution-NoDerivatives 4.0 International License.

I am so grateful and glad that Daniel Wallace is alive, kicking and writing.

In his latest post on his blog, published yesterday here, Wallace easily deals with the hasty attack on Christianity by Kurt Eichenwald, who, writing for Newsweek, exaggerates the so-called unreliability of the New Testament transmission methods, even overstating Bart Ehrman's case. Just to give you an example of some of the unsubstantiated things Eichenwald says, and Wallace should have mentioned this I think, and this of the 381 Council of Constantinople: "a new agreement was reached—Jesus wasn’t two, he was now three—Father, Son and Holy Ghost." Oh really?!

I am currently reading through Wallace's book at the moment on Revisiting the Corruption of the New Tesetament: Manuscript, Patristic and Apocryphal Evidence. 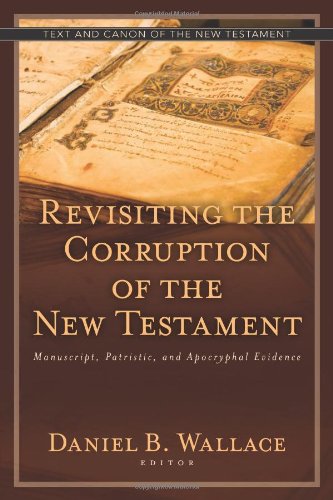 My intention, by the way, for anyone who is interested and for my own reference, is to publish chapter summaries. Each subject is distinct and actually written by a different scholar, with the whole lot edited by (and the first chapter written by) Daniel B. Wallace. In this book, one of the key challenges of Ehrman's interpretations is that he does not acknowledge his own biases, in particular the criteria of orthodox corruption. While that is not entirely true, from what I can see, we have another clear case here that works in the opposite direction. So when we see "as far back as the second century" from Wallace, Ehrman would maintain that the second century is still a fair old way off from the first and very fragmentary in what we do have, and even these are probably at least copies of copies of a copy (or of copies). He also would remind us that from the evidence we hold, in manuscript copying errors intensify the further you go back and that we simply "cannot know" what the originals said.

While I agree with Wallace that Ehrman overstates his case, it is easier for me to see now when presumptions are "smuggled onto the table" (Stephen Holmes' expression), and here "as far back as" implies that this is an incredibly long way back. Challenged, the Wallace crew would be quick to compare to other ancient Greek texts that are much less well attested in terms of manuscript evidence. Ehrman is not in the business of comparing, however, and has no more faith in the copies of manuscripts that we have of Homer, for example, as representative of what was originally penned to parchment.

But the key issue I think here in Wallace's otherwise solid defence against this weak attack by Eichenwald, is an often-forgotten translation stage. It seems to have been too obvious to mention by everyone, but it is not insignificant: the quotations in the gospels are already translations. We should be aware of that and reminded of that in these sorts of conversations. So in that sense, perhaps unwittingly, Eichenwald had a point he did not realise he was scoring!
Posted by John Bainbridge at 00:08

Thanks very much for your feedback, really appreciate the interaction.

It sometimes seems that I was born to tango with this passage. I’m trying to be as rigorous and as consistent as I can be with applying my ...